« “Best Sports Massage Treatment within this area!”
The Importance Of Keeping Active & Moving As You Age » 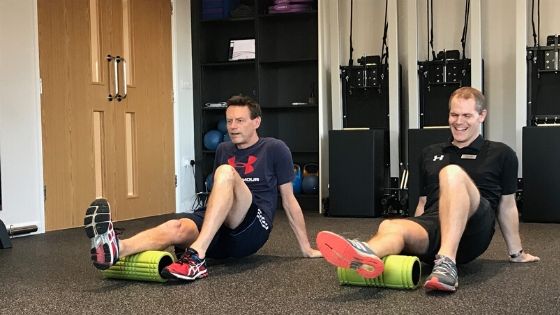 Ian Philips, an England Masters Hockey player, was suffering from an ankle injury and thought his hockey days were over, until he came to Hatt’s. With Ian’s determination and the help of the Hatt Clinic team, he was back to Hockey within no time. Here is an insight into Ian’s journey so far:

Tell us about your injury:

In May 2017, I had a bad injury to the ankle and tore 3 ligaments. This was the second time I had experienced this injury to the same ankle.
I play hockey and balance is very important for me, however, having torn ligaments in my ankle, my balance had all gone. Before my first session with Guy, I thought I was done, my ankle was so swollen and I couldn’t walk on it for about 2 weeks. I really felt as though I had no hope playing at the European Masters Championships in Holland, which were due to start in August. However, Guy had faith!

What’s been your biggest challenge in dealing with your injury?

Motivation has been my biggest challenge with my injury. When you play sport at a certain level and you get injured, it’s very easy to get really down about it, as there are a lot of things you miss out on: the competition, the camaraderie, being away and putting on a show – so if your injured, it can be easy to get morose about it and fed up. Therefore, motivation is key and that’s why the likes of Guy, in particular, really helps as he is very upbeat and positive, even though I was thinking to myself ‘you fibber – you’re just telling me it’s not going to come back’ – but the proof was in the pudding that it did work.

Did you find your treatment with Hatt’s effective?

Yes! After having part of my treatment with Hatt’s, I started to believe that I could play in a tournament 3 months later, which originally I was told I’d never have a chance in. The journey was really good and I think it’s that linking up of different facets that helped because I’d played sport at a reasonable level for a long time and had injuries in the past, then I’d go to a physio and they’d give me a hand written sheet of some exercises to do. So, when I was going to work, seeing my family etc, I’d then go to the gym and think ‘what am I supposed to be doing? I can’t remember’.

So for me, the linking with rehab was brilliant as the instructors had already spoken to Guy and sorted out what I needed to do. Each time I turn up, I do all of the exercises that are designed around strengthening my ankle. The instructors are very good at pointing out if I’m not working hard enough or doing the right thing. The programme is very cohesive and is designed so you have identification of injury, treatment of injury, rehab of injury then strength and conditioning to ensure you don’t get hurt again. This, I feel, is just the right way to approach an injury.

I couldn’t have made this progress by myself or without the support of the Rehab Instructors Danny and Hannah. I find that personal trainers tend to be more focused on lifting heavy weights – they don’t work specifically to your injury, but spending time with Danny and Hannah at the Hatt’s rehab gym meant that I managed to play in a big tournament and played 8 games in 10 days (admittedly a little sore afterwards) but I wouldn’t have been able to do that without the Hatt team.

What’s next for you?

I have a big tournament in July 2018, so I’ll be starting Strength & Conditioning at Hatt’s in addition to my normal training with the sole objective of getting to Barcelona in July in absolutely top condition.
I am a genuine believer that if you get your fitness levels right, you mitigate injuries – that doesn’t just mean going to the gym and doing lots of exercises that really don’t work for you – you’ve got to do stuff that’s tailored to you.

We will be catching up with Ian soon to see how he is progressing as the Barcelona tournament gets closer. To keep up to date with Ian’s story, watch out for posts on our Facebook page @HattClinic.

At Hatt’s, we are passionate about helping you achieve more than you ever thought possible. So, if like Ian, you think you could benefit from the support and expertise of the Hatt Clinic team, don’t hesitate to get in contact on 01380 730473.